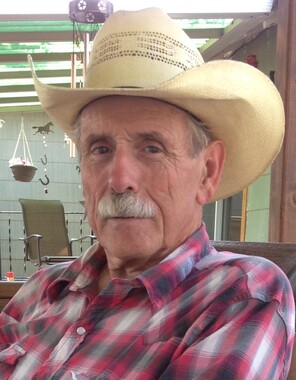 Back to Larry's story

A Celebration of Life service for Larry Dean Williams age 76 of Enid will be 10:00 am Wednesday at the Community Bible Church with Rev. Dan O'Daniel and Rev. Bill Smith officiating. Burial will follow in the Enid Cemetery under the direction of Ladusau-Evans Funeral Home. The family will receive friends Tuesday from 6:00 to 7:00 pm at the funeral home.
Larry was born November 30, 1943 in Enid to Hubert and Josephine Roark Williams and passed away early Saturday, in Oklahoma City. He attended and graduated from Enid Schools in 1961. He enjoyed riding bulls and was a very accomplished rider. He went to work for the City of Enid and later running heavy equipment operator in the oil field. Larry went to work for Garfield County Sherriff Dept. as a deputy for 10 years receiving an "Award of Valor" for the Outstanding Bravery that he demonstrated on April 2, 1984. He worked as a security officer for Johnston Grain Co. Larry married Lois Matlock on July 2, 1984 in Taos, NM. He attended the Chisholm Trail Cowboy Church.
Larry is survived by his wife Lois, step sons; Gary Matlock (Teresa) and Dale Matlock (Paula), grandchildren; Rebecca and Garrison Matlock, Jory Dick (Lori), Stacy Jones (Sarah), his sister Debbie Crisson (David), a brother Don Williams and numerous other family members, who thought he was the greatest.
He was preceded in death by his parents, sisters; Thelma Zelnicek, Velma Vculek, and Cecil Sproat, brothers, Charlie and Bill Williams, niece Anne Klassen, and nephew Jerry Zelnicek.
Memorials may be made to Chisholm Trail Church or OMRF-Alzheimer Division with Ladusau-Evans Funeral Home serving as custodians of the funds.
Condolences may be made online and the service can be viewed online at www.ladusauevans.com.
Published on January 5, 2020
To send flowers to the family of Larry Dean Williams, please visit Tribute Store.

Send flowers
in memory of Larry

A place to share condolences and memories.
The guestbook expires on April 04, 2020.

Karen Carpenter- Vollman
Lois and family so sorry for your loss thoughts and prayers for you. I remember Larry as a friend and from the rodeo days. God Bless love Karen.
Bill and Vickie Lehman
We enjoyed going to Cowboy Church with Larry! A good Christian man who always had a smile! You are in our prayers Loise.
Kenneth Kerfoot.
Miss you. Rest in peace Larry. All the family are on my prayers.
Jennie Benge(Roark)
I'm so sorry for your loss. I remember Larry as one of the nicest guys .And boy could ride those bulls. You all are in my thoughts and prayers.
Susie sue wiggs
I truly miss him so much
Michele & Bucko Gray
Our Thoughts and Prayers are with you all . Larry was a wonderful man . Sending Hugs and Love to Lois and the family.
Teresa Crain
Larry was a memorable guy. I'll always remember the "words of wisdom" he gave me years ago: "Some examples are better studied than followed!" Very true!
Sharon(Rodriguez)Free
So sorry for ur loss.One of the best men I knew Luv ya all if ya need me my no. 8176290265
View all