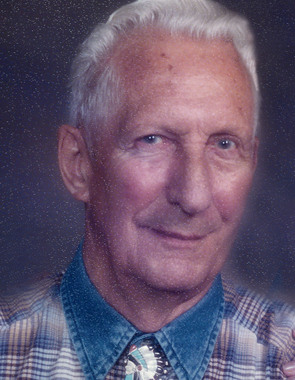 Back to Kenneth's story

Kenneth grew up in McFadden and Laramie, Wyoming. In 1934, he and his brother, Charles Emery, lost their mother. At 17, he quit school and joined the U.S. Army, entering WW2 as an anti-aircraft gunner. He served 31 months in the Pacific Theater on the island of Morotai.

In 1950, he married Maybelle C. Hawley in New Castle, Wyoming. They had 3 children: Larry, Norman, and Sharon. Ken worked for Baker Oil Tools, moving all over the country. He later worked for and retired from Champlin Oil Refinery.

He loved restoring old cars, antique gas pumps, a player-piano, pin-ball machines and whatever delighted him. He belonged to the Enid Antique Car Club. He was a member of Calvary Baptist Church.

He is survived by his wife, Maybelle, of the home and his 3 children: Larry (Judy), Norman (Debbie), and Sharon, along with 7 grandchildren and 10 great-grandchildren.

In lieu of flowers, please consider donating to Calvary Baptist Church or the charity of your choice. Guestbook is available at www.andersonburris.com.
Published on January 11, 2020
To send flowers to the family of Kenneth G. Gariepy, please visit Tribute Store.

Send flowers
in memory of Kenneth

A place to share condolences and memories.
The guestbook expires on April 10, 2020.

Patty Lorenz
So sorry to read the loss of Kenneth. I first met Kenneth while working at Northcutt and he was one of the drivers I would call to pickup auction cars. A true gentleman and sweet soul. You are in my thoughts and prayers.
View all