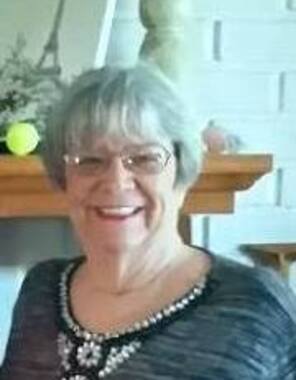 Back to Darla's story

Funeral service for Darla Fae Olson, 79, Fairview, is 1:30 p.m. Wednesday, January 31, 2018, at the Aline Methodist Church in Aline, Oklahoma, with the Reverend Linda Grounds officiating.
Burial follows in the Aline Star cemetery. Arrangements by Fairview Funeral Home Inc.
Darla Fae Olson was born December 4, 1938, to Thomas and Fae Wright, and went to lead the heavenly choir January 28, 2018.
Darla was born in Oakwood, Oklahoma. The family moved to Oklahoma City, then on to Del City, Oklahoma, where she attended school. Halfway through her senior year, she moved back to Oakwood so she could graduate there. Darla loved returning to Del City yearly to attend the alumni banquet.
Darla met and married Don Olson in 1969. She moved from Oklahoma City to a dairy farm in Aline, Oklahoma! Her family of three instantly became a family of eight, and she loved every minute of being a farm wife and mom.
When Don retired in 2004, the couple moved to Fairview. Darla continued working for Jensen's Inc. where she had been their bookkeeper for many years.
Darla's son-in-law, Dennis Boyer, had a life-changing motorcycle accident in 2006. Darla and Don moved in with their daughter, Cheri, and Darla spent the next eleven years being a loving caregiver to Dennis.
Darla was bigger than life. She loved her Savior more than anything. She loved her family, which included her church family. She played the organ and directed the choir at the Aline Methodist Church.
She is preceded in death by her husband Don, parents Thomas Wright and Fae Wright Henry, stepdaughter Debbie Bradford, son-in-law Dennis Boyer, sisters Lorraine Ivie, Betty Proffit and Cleta Hickman and brother Tom Wright.
Darla leaves behind her daughter, Cheri Boyer, sons Scott Olson and wife Kim, Wade Olson and wife Merlene, Gary Olson and wife Kim and Jace Olson and wife Donna.
Grandchildren, Whitney Mendez-Boyer, Wesley Olson, Shannon McDowell, Derek Olson, Landon Olson, Dane Olson, Ian Olson, Bradley Olson, Seth Olson, Ethan Olson, Megan Blalock and Lindsey Olson.
Great-grandchildren and nieces, Wanda McNish, Charolette Baranski, and sister-in-law Rubena Wright.
If there was a picture of "selfless" in the dictionary, Darla's picture surely would be there!
Published on January 29, 2018
To plant a tree in memory of Darla Fae Olson, please visit Tribute Store.

Plant a tree in memory
of Darla

A place to share condolences and memories.
The guestbook expires on April 29, 2018.

Restore this Guestbook to share a memory or message of condolence of your own.