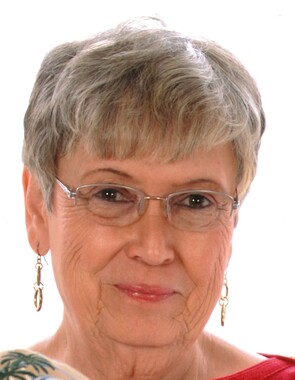 Back to Betty's story

Celebration of life service for Betty Ann McDougal, 77, of Kremlin will be 2:00 p.m. Monday, January 20, 2020, at Anderson-Burris Funeral Home Chapel. Burial will follow in Kremlin Cemetery. Arrangements are by Anderson-Burris Funeral Home & Crematory. The family has requested casual attire.
Betty was born April 2, 1942, in Rocky Ford, CO, to Harry and Mabel (Flora) Peats and passed away on Wednesday, January 15, 2020, in Enid.
On July 14, 1963, she married Donald McDougal in Rocky Ford, Colorado. She worked for the Rocky Ford Daily Gazette until moving to Oklahoma in 1981. Betty and Judy Thorp opened T&M Printing in Enid in November 1985. She continued to operate the business until 2016, when she retired. Betty was a charter member of the Enid AM TOO AMBUCS. For those who knew her they knew Betty as a giving and loving person.
Betty is survived by her 2 daughters, Shauna (Jay) Gillpatrick of Enid and Tonya (Terry) Sinclair-Stucky of Pretty Prairie, Kansas; grandchildren Blake Gillpatrick (Whitney), Jason Gillpatrick (Allison), Tyler Sinclair, Tanner Sinclair, Taylor Sinclair, Maegan Lobban (Cody), Bryce Stucky and Chandler Oliverson (Mark); great-grandchildren Braxton Gillpatrick, Keller Lobban, Jace Lobban, and Maddox Oliverson.
She was preceded in death by her parents; husband Donald on October 20, 2019; brother, Harold Peats; and son-in-law Donnie Sinclair.
In lieu of flowers, memorials may be made through Anderson-Burris to Enid AM TOO Ambucs. Guestbook is available at www.andersonburris.com.
Published on January 18, 2020
To plant a tree in memory of Betty Ann McDougal, please visit Tribute Store.

Plant a tree in memory
of Betty

A place to share condolences and memories.
The guestbook expires on April 16, 2020.

John & LaDonna Rothermel
We will miss you both now. Your together now so go fishing and relax.
Love all of you♥️🙏🏼
View all